Thanks to the dedication and complicity of the director, producer and scenarist Pascal SAVARD, the company develops and diversifies in terms of directing and continues to support new projects. 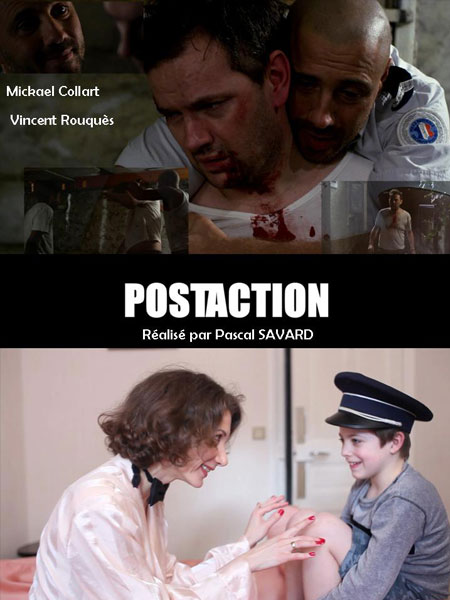 The first film produced by the GAC, and the first short film by its author, Pascal Savard, PostAction portrays Alex, a young man, in search of his father, who was a police officer…

After several world tours, a stint on American television, and some sixty selections at various festivals and broadcasts (including Odense, Detmold, Festroia, the Boonies, San Luis Obispo, Orlando, Atlanta, Metz, Avignon…), this first film ended its career to give way to our new productions.

Alex, in his thirties, is looking for his father, whom he knows little about. In his memory, he was a policeman.

Alex kidnaps law enforcement officers in order to interrogate them, until the day when Alex seems to find the man he is looking for.

> View this movie on IMDB

A woman wakes up in a cemetery, in front of a man. What if he offers her a new life through death…?

Thanks to joint investigations carried out by various specialized French intelligence services, a series of planned attacks will be thwarted by specialized intervention forces.
However, given their unique dangerousness, they will have a lot to do against this association of extremist paramilitary groups willing to do whatever it takes to achieve their goals.

This project produced by the Groupe Audiovisuel Cinéma is under development.

Synopsis
Louis is a sociopath, ready to do anything to keep his life unfathomable.
Due to his peculiarity, Louis is regularly contacted by powerful men in order to settle particular cases.
His family, kept away from his activities, only hopes that he will become more human.

COVID 19 pandemy :
Watch our specific sanity rules to deal with the Coronavirus COVID 19